A Word About Noah Smith


Yesterday, Bloomberg columnist Noah Smith fired off a tweetstorm in reaction to a brief Washington Post column about a new book that traces the effect that American race policy had on Nazi Germany. The thrust of the book, Hitler’s American Model by James Whitman, is that when they were looking for instructive lessons in how to legislate a racist society, Nazi officials made ready use of the longest-established and, in terms of carrying out its policy aims, most efficient racist political structure then in existence: the Jim Crow South. Jeff Guo, the author of the column, also tweeted about the book, and Smith’s Twitter outburst took flight from Jeff’s tweets. Smith’s reaction is below. (Apologies for the lengthy screenshot-ing, but it deserves to be read in full, and any abridgement would render what follows suspect.) 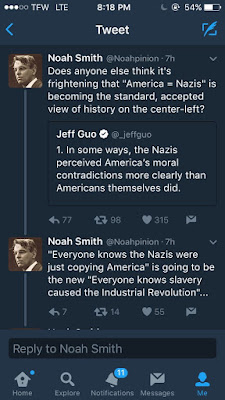 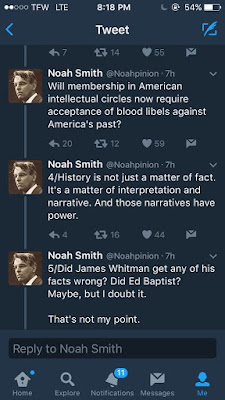 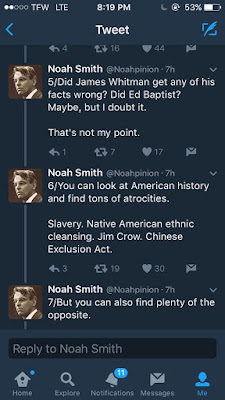 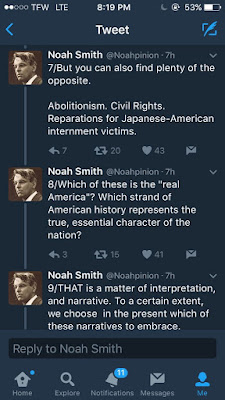 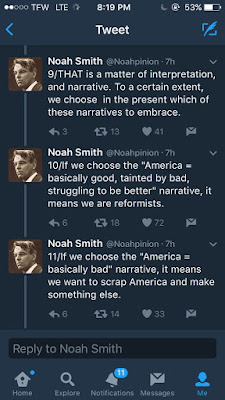 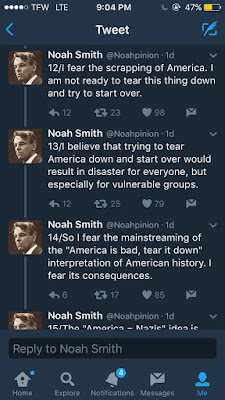 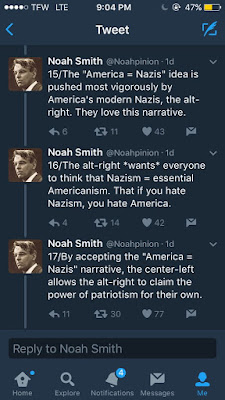 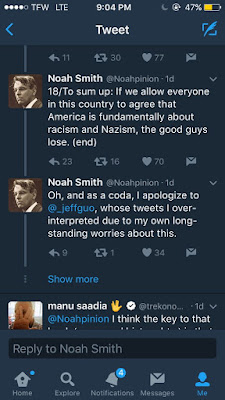 On one level, Smith is absolutely right: history is an exercise in choosing an interpretation of facts and events. That inescapable aspect of its epistemology cannot and should not be maneuvered around or swept under the rug. It is why basically every currently-active practitioner would disavow the 19th century German historian Leopold von Ranke’s imprecation to write history “as it actually happened”—because that exercise is, fundamentally, impossible, even if they aspire to his thoroughness and open-mindedness in amassing copious evidence. The contemporary historian of the practice of history, Peter Novick, famously called this central problem in historiography “That Noble Dream”—to write objective history independent of the historian’s own coloration, and to have his handicraft recognized as having achieved that by his professional colleagues and the world at large. “That White Whale” might have been more apt.

But Smith’s take is a long, long way from Ranke’s. He’s not saying that we should “do history” independent of bias—he’s saying that we should welcome that bias, provided it goes in one particular direction: to glorify, rather than denigrate, the history of the United States, by which he means that accounts of less-than-honorable episodes and social structures should be subordinated to a narrative of progress, a moral umbrella that is continuously and unstoppably in the act of opening. To do otherwise is to invite an ultimate victory by retrograde elements.

Look at tweet number 5 above: “Did James Whitman get any of his facts wrong? Did Ed Baptist? I doubt it. But that’s not my point.” Here, Smith is referring to the controversy over Ed Baptist’s book The Half Has Never Been Told, which has occasioned violent protest from economic historians for treating slavery, and specifically the expansion of the unimaginably cruel plantation cash-crop-based slavery of the period just prior to the Civil War, as a necessary condition for the Industrial Revolution and the rise of modern market capitalism. The controversy between Baptist and his critics is well-covered by this article in the Chronicle Review.

Smith says Baptist probably got his facts right. (Baptist’s critics do not agree, but that is immaterial to the point at issue here.) Where Baptist, and Whitman, went wrong, qua Smith, is in their implication that these significant, potentially over-arching moral taints are the “real story” of America, as opposed to the mostly benign description offered by Smith.

This is a tendency common among economists, and that is the purpose of this blog post. Baptist’s (and Whitman’s) sin isn’t so much that they’re wrong, but rather that if they’re right, that means that America, and American capitalism in particular, are Bad. And if there’s any common theme in modern mainstream economics, it is that first and foremost, capitalism is Good.

This reminds me of a letter that frames a piece I wrote with Bernard Weisberger, also as it happens in Chronicle Review. It was sent on May 1st, 1886 by Arthur Hadley, then a junior professor of political economy at Yale, to his colleague Henry Carter Adams at the University of Michigan. By way of background, the previous year Adams had helped to found the American Economic Association, in part on the basis of a provocatively left-wing platform that took issue with the prevailing ideology of economics as it was then practiced in the oldest and fanciest academic departments and in non-academic organizations that assembled experts from across the late 19th century elite to opine on policy. Furthermore, since the AEA’s founding the previous September, social tensions had only heightened, and Hadley’s letter was sent the very same day that a general strike was called in Chicago, leading directly to the Haymarket Riot on May 4th.

In response to the AEA platform’s statement that “We regard the state as an educational and ethical agency whose positive aid is an indispensable condition of human progress,” Hadley wrote

The fact that the principles are true, only makes the danger of misinterpretation more serious. … My sympathies are in many respects strongly with the movement. My inclinations would have led me to join it from the first. But I was afraid, and still am afraid, of getting into a position which would do practical harm both to me and to others, where I should seem to be made an advocate of measures and maxims which I cannot but regard as dangerous in the extreme.

Like Smith in his infamous Tweet #5, Hadley is saying that the facts may well point to an interpretation with radical implications, but that makes it all the more dangerous, and therefore imperative that we reinterpret the facts to be more amenable to the powers that be. So what’s the harm in that?

Here’s where things get personal. Several years ago, Smith referred to me in the following way:

What Smith is accusing me of here is interpreting the facts about rising inequality—the subject under discussion—in such a way that it would validate what Smith considers to be my prior belief—in this case that the neoliberal revolution in economic policy-making caused substantial harm and should be reversed. Preferences about policy might color interpretations of fact, in other words.

But look what Smith did, like Hadley before him: colored his interpretations of fact to fit his ideological imperatives. The final tweet states it outright: if we follow the lead of Whitman and Baptist, then the fascists and the white supremacists win. And yet, Smith’s slander against me as “no such rationalist” is contrasted against… who else but himself?

Speaking more generally, this is a big problem for economists. Certain truths cannot be brought into question, that capitalism is a force for moral good foremost among them—to say otherwise is to reveal oneself to be, ipso facto, “no such rationalist.” Yet here is the conclusion to my essay with Weisberger (first published in Democracy):

It’s hard to escape the conclusion that in exiling radicalism from the AEA and from mainstream economics, its practitioners attained enormous intellectual prestige and elite approval precisely by sacrificing the disinterested search for answers to the most controversial questions in economics to the professional imperative of gaining the approval of the elite.

That they abandoned "advocacy" under the banner of "objectivity" only raises the question of what that distinction really means in practice. Perhaps actual objectivity does not require that the scholar noisily disclaim advocacy. It may, in fact, require the opposite.

Smith is, in some ways, more honest than most, notwithstanding his slander against me: he’s openly telling us what he’s doing. Hadley’s letter was private, and few others commit their motives to paper (or pixels) at all. So in this spirit of honesty, let me implore him and the rest of our profession to recognize in themselves what they have been quick to denounce in others: an ideological motivation that colors the public, performative interpretation of facts.

I would like to make two further, related points arising from the debate this post created on social media:

1. Phil Cohen brought up the excellent point that Smith's motivated history of the United States just manifestly fails to accomplish what Smith says it would accomplish, namely that telling the sad tale of American white supremacy plays right into the hands of right-wing nihilists who want to burn it all down and are just searching for a moral justification by which to do that. Cohen's point is rather than the triumphalist history Smith wants us to be telling in fact has the deadening effect of blinding us to horrific recurrences, mostly prominently in recent memory, Donald Trump's victory in the 2016 election. Many of us who like to think of ourselves as the empirically-grounded Caucus of the Reasonable simply assumed that could not possibly happen, because for it to happen implies that the lie we'd been telling ourselves about American history must have been a comforting bedtime story that left us unprepared to fight against true fascism when it was finally arrayed before us.

2. This realization that we'd been rendered powerless by our too-rosy view of American history has occasioned a backlash, and that backlash has definitively gone too far. The backlash says that far from being impossible, Trump was actually inevitable, and any honest reckoning with the ever-present, power-exerting object that is white supremacy must lead us to this dystopic conclusion. That is the subtext behind this column by Zack Beauchamp: Trump's rise was just the final, predictable outgrowth of centuries of deep-seated racism. (I criticized the column here.) Furthermore, Beauchamp later argued, no class-based economic platform could possibly defeat him. Again, see my response.

Among a certain class of elite opinion-haver, with just enough knowledge of history to be dangerous, the view that the New Deal, for example, was affirmative action for white people (as opposed to what it really was: social democracy for white people) serves a useful purpose: since all of American history is white supremacist, nothing could have stopped Trump, which in turn means that they specifically could not have stopped Trump had they had a more reality-based view of history than the excessively rosy one they wore to their political Red Wedding.

Smith's objection to Whitman's book is in some sense a worthwhile corrective to these overblown and self-serving over-corrections, but he doesn't quite land his blow. As I read Smith, he's saying we can't let the history of southern racism's connections to Nazi Germany cloud our judgment of American history as *not* irredeemably infused with racism, because that would mean we, enlightened actors of the present, have no power to possibly change anything, and that would be bad. Kudos to Smith for fighting this fight, but he would be more effective on the battlefield if he'd sharpened his weapons of historical interpretation more assiduously prior to the battle.

Posted by Marshall Steinbaum at 6:37 PM

Marshall Steinbaum
I'm an Assistant Professor of Economics at the University of Utah and a Senior Fellow in Higher Education Finance at the Jain Family Institute. I use this blog to write down and record things that don't make sense to publish elsewhere, such as personal reflections as an economist on the history and culture of the economics profession.