Is Student Debt Only a Problem for Dropouts?

In a recent article in the otherwise-excellent Washington Monthly issue on inequality, Rachel Fishman argues that college debt isn't a problem. Instead, low graduation rates are. Her article follows a Brookings Institution report that took a similar line from June, greeted with applause for its willingness to question the conventional wisdom about a flood of student debt drowning young workers.

The facts, unfortunately, aren't so optimistic. While it's true that college dropouts carrying higher education debt loads face a dire labor market situation, they're not the only ones. The happy talk about student debt for those who do manage to graduate is misplaced, as is the idea that the labor market's problems could be solved if more people manage to complete their BAs.

The key evidence is from a recent paper by Beaudry, Green, and Sand. Those authors show that demand for skilled labor has declined substantially since 2000, even during the expansion that ended in 2007 and even as the supply of college graduates increased. As a result, college graduates take jobs that didn't previously require a BA, "filtering down" the labor market hierarchy in what my colleague Elisabeth Jacobs calls "a cruel game of musical chairs." As a result, those with fewer educational credentials get forced out of employment and the labor market altogether, and those lucky enough to have jobs aren't in a position to demand higher wages.

Fishman, on the other hand, writes "at current graduation rates, the United States will fall five million credentials short of meeting labor market demands by 2020." I have no idea where that forecast of labor demand growth come from, but it would be fair to say it's completely at odds with reality. She writes that "according to research by Georgetown University, over half of the added jobs since the recession have gone to those who have a bachelor's degree or better." It's unclear what research Fishman is referring to or whether that factual claim is about job creation or total hires (that is, new jobs plus continuously-existing jobs whose occupants have turned over), but regardless: the claim is false. I've plotted cumulative job creation and hires since the first quarter of 2009 for all workers and for those with a BA or higher credential below, as reported by the Quarterly Workforce Indicators. In fact, insofar as there has been hiring and job creation, it's been among low-wage, low-education-qualification jobs. 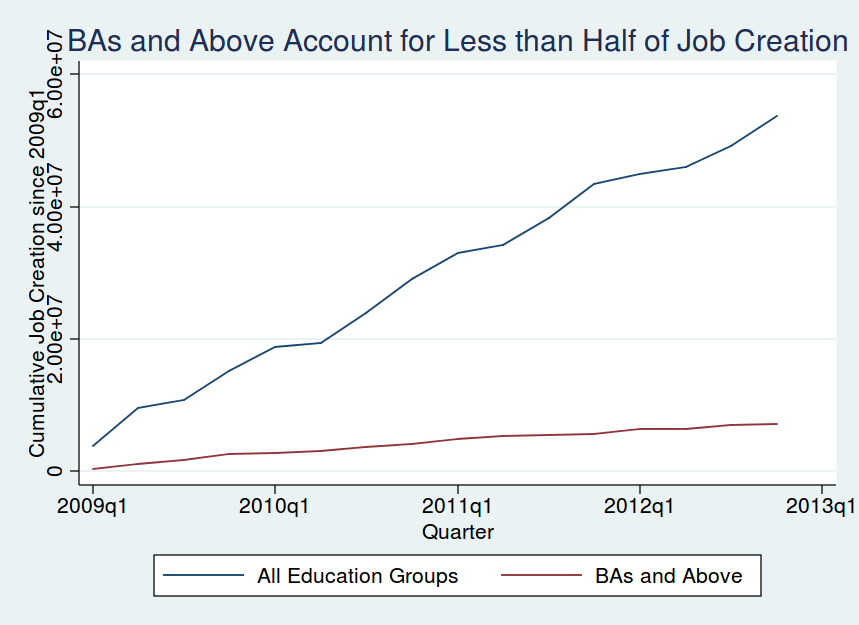 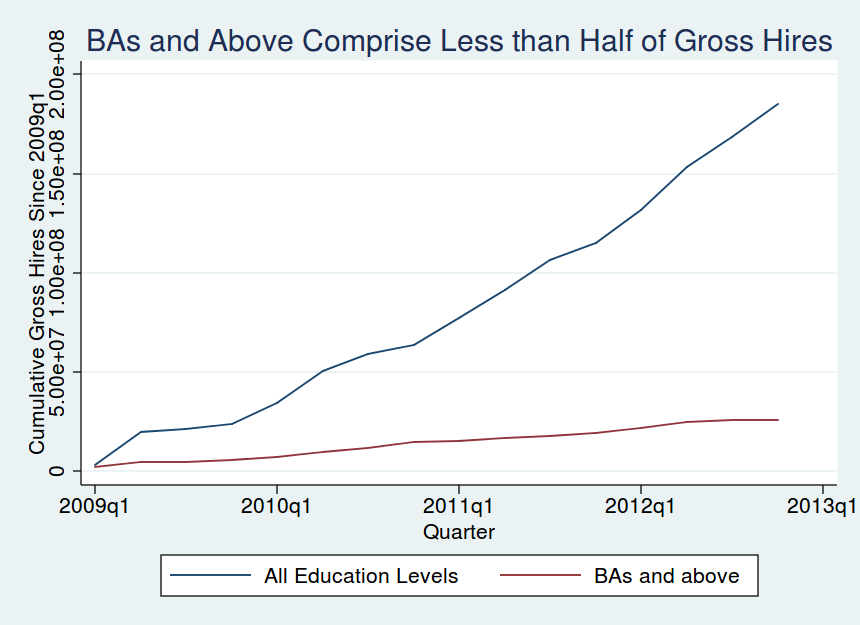 Let's consider Fishman's main point. She writes "college degrees generally provide students enough of a bump in income to cover the cost of paying back loans." College grads do indeed earn significantly more than those who don't manage to graduate. But is the difference enough to make up for the increase in the cost of higher education? That depends, of course, on how much education costs have increased, and I haven't yet assembled illustrative data on that question. As for simple college wage premiums, however, it certainly doesn't look like the wages graduates earn make up for the increased cost of college. 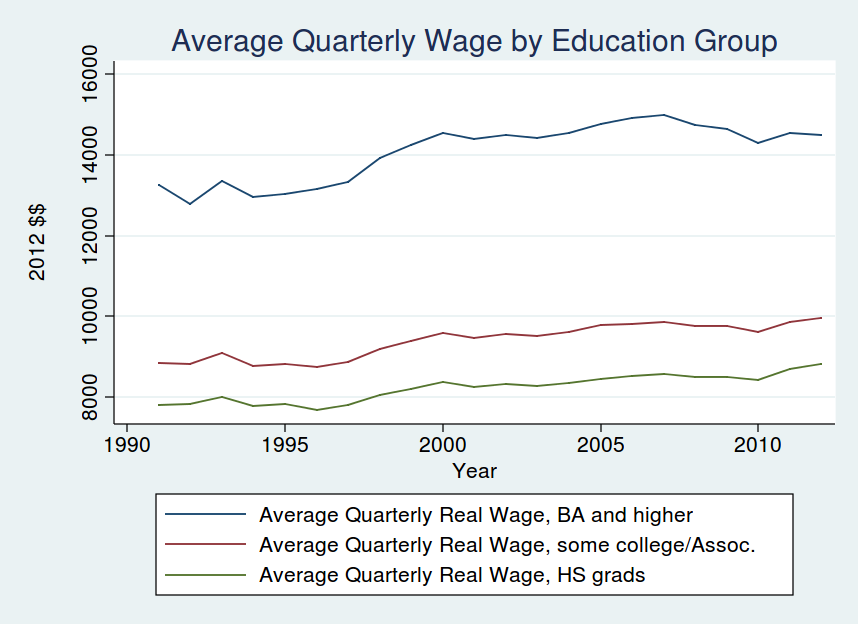 I would argue that the implication of this data is that while there is a persistent gap in average earnings among those who do gain employment at different educational qualification levels, that gap is essentially static since 1990.

What would be especially informative here is wage premia weighted by access to jobs. We do know that the more educational credentials workers have, the lower their unemployment rate and the easier it is to find a job. If that's true, the real benefit to a college degree in a persistently slack labor market is not wages, but job security. The implication of that fact is stark and entirely contrary to Fishman's argument that increasing the share of workers with college degrees would reduce inequality. On the contrary, if there were more college grads, inequality would be worse, because lower-wage workers would be pushed out of the labor market entirely.

In the near future, I will present evidence on wages by education group and age cohort, as well as education costs, to investigate what's happened to the relative rate of return to college. Given the dire story I've been telling, it's something of a puzzle that educational attainment hasn't declined. I suspect that puzzle is explained by the job-security/musical chairs mechanism, but the data will tell. One thing we can say for sure, however, is that there's very little good news for workers to be found in the wage data, no matter how good their educational credentials. And pushing college students to saddle up with debt in a push for their BA, even if it does make sense as an individual decision, would probably cause yet worse outcomes for the uncredentialed and result in higher inequality overall.
Posted by Marshall Steinbaum at 8:25 PM

Marshall Steinbaum
I'm an Assistant Professor of Economics at the University of Utah and a Senior Fellow in Higher Education Finance at the Jain Family Institute. I use this blog to write down and record things that don't make sense to publish elsewhere, such as personal reflections as an economist on the history and culture of the economics profession.